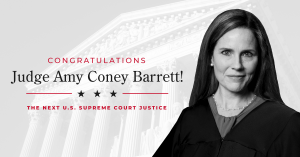 “Congratulations to Judge Barrett on her confirmation today, and thank you President Trump for once again following through on your promises to the people of Wisconsin. President Trump has now appointed three strong Justices on the Supreme Court who will follow the rule of law and that’s why we need to give him four more years in the White House.”

“It’s long past the time that Joe Biden answers questions about whether or not he plans to pack the court. It’s no longer a hypothetical, his liberal allies are calling for it — Biden can’t duck the American people and the press any longer. The American people deserve to know if Joe Biden plans to cave to the radicals in his party if he is elected.”