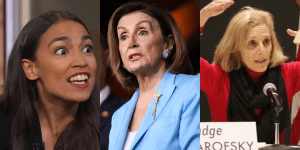 Just Like Her Allies, Karofsky is Trying to Manufacture a Fake Crisis

[Madison, WI] – In the race for Wisconsin Supreme Court, liberal activist and Dane County Judge Jill Karofsky is now taking a page out of the book of her Democrat allies. As Congressional Democrats continue to pursue a baseless impeachment investigation against President Trump, Jill Karofsky is similarly trying to manufacture a fake “corruption” crisis to further her own political interests.

Similar to the pathetic lies spewed by Nancy Pelosi, Adam Schiff, and Chuck Schumer, Jill Karofsky is spreading slanderous lies and attacking the institution of Wisconsin’s highest court without any evidence to back it up. Karofsky and her Democrat allies have consistently shown that there are no lengths they will not go to tear down their political opponents, even if it means destroying institutions that Americans hold dear.

Since announcing her campaign, Karofsky has continuously attacked Wisconsin’s Supreme Court as an institution, along with its members, claiming that the Court is corrupt. In Washington, Democrats have put a target on President Trump’s back and have stopped at nothing to impeach the president, even if it means manufacturing a crisis built on lies.

In her new TV ad, Karofsky once again doubles down on her attacks against the Wisconsin Supreme Court and its members by continuing to her slanderous and reprehensible claim of corruption. But much like her partisan allies, Karofsky hasn’t provided any evidence to support her claims. Karofsky’s attacks are not only baseless, they are beneath the integrity expected of a Judge.

Karofsky’s cavalier attitude towards the truth should deeply concern voters and calls into question her character and judicial temperament. When asked to back up her claims of corruption, Karofsky refuses to take responsibility for her ridiculous accusations and instead tries to shift the responsibility to others by claiming that she is only repeating what she has heard others say.

Karofsky’s attacks on the Court prove that she has no real interest in serving the people of Wisconsin and upholding the Constitution. Karofsky’s only interests include serving her political ambitions and upholding her social justice warrior agenda, no matter the cost.