[Madison, WI] – Mandela Barnes is still leaving much to be desired with his qualifications for the U.S. Senate. Despite the fact that Barnes touts his experience as chairman of Tony Evers’ Climate Change Task Force, at a recent event, Barnes couldn’t name a single task force proposal that has been implemented – a reminder of the reality that Barnes has actually accomplished next to nothing. 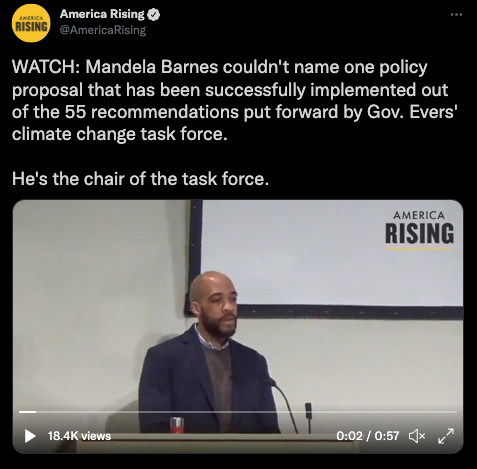 While the task force was drawing up proposals, Barnes actually suggested bypassing the Legislature to implement his far-left recommendations – including new taxes on carbon, gas, and road use to pay for more mass transit in cities and shutdowns on coal plants.

“The proposals from Mandela Barnes’ Climate Change Task Force were either too radical or too ridiculous for even Evers administration bureaucrats – and that says a lot about Barnes’ lack of sincerity and his failure to get things done,” said Republican Party of Wisconsin Communications Director Anna Kelly. “Barnes’ inability to name one success from his top ‘accomplishment’ reminds voters that he hasn’t actually accomplished anything, and he certainly doesn’t deserve a promotion.”