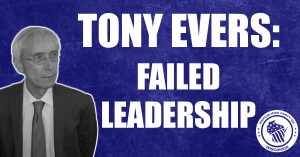 [Madison, WI] – Tonight, Gov. Tony Evers will give his third state of the state address following another year of failures and weak leadership from his administration.

“Gov. Tony Evers’ administration is marked by failed leadership, broken promises, partisan games and little accomplishment,” said Andrew Hitt, Chairman of the Republican Party of Wisconsin. “With every challenge Wisconsin has faced over the last year, Evers’ weak leadership let down the people of Wisconsin.”

The last year of Evers’ administration has been marked with weak leadership:

Wisconsin’s vaccine rollout one of the slowest in the midwest

Instead of accepting the legislature’s help to ensure that Wisconsin rolled out the COVID-19 vaccine smoothly, Tony Evers took on the project himself and completely botched the process. Wisconsin is one of the slowest midwestern states to roll out the vaccine. Health care workers are searching for answers and are being left with no communication from the Evers Administration.

Kenosha left in ruins after Evers fanned the flames

When Kenosha was turned upside down by violent riots, Tony Evers opted to play politics with Kenoshans’ safety and refused to immediately accept federal aid. It took four days of violence for Evers to leave Madison and survey the damage, claiming that the “pandemic” prevented him from making the trip while Wisconsinites desperately needed steady leadership.

Wisconsin rang in the new year with a new uptick in unemployment claims. After shutting down businesses, the Evers Administration left thousands of Wisconsinites waiting for unemployment claims for months. Although claiming that fixing the backlog was a priority, he only met with the Secretary of DWD once, and that was to fire him. Now in 2021, the Evers Administration continues to bungle the process.

When Wisconsinites needed steady leadership, Evers and his hyper-partisan staff decided to play games instead. After insisting that he did not have the power to unilaterally move an election for weeks, Evers tried to illegally move the date of the April election at the 11th hour for political gain. Despite his efforts, Wisconsin was able to safely hold an in-person election by respecting the laws and making adjustments where necessary. The people of Wisconsin’s 7th Congressional District were forced to go to the polls five separate times in 2020 to have their votes fully count because Tony Evers wanted to tilt the field for his handpicked liberal Supreme Court candidate and suppress rural voters. Rather than work across the aisle, Evers’ staff also chose to secretly record Republican lawmakers during a meeting to determine the state’s response to COVID-19.