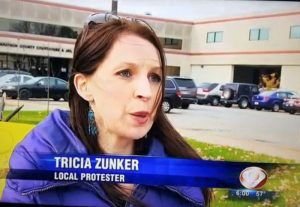 [Madison, WI] – After spending years protesting and denouncing the police, candidate for congress, Tricia Zunker, is now asking her local police department to guard her from peaceful protests against her.

As President of the Wausau School Board, Zunker and the rest of the board are being protested by parents upset with the board’s decision to keep schools closed this fall. In a Facebook post, Zunker said that upon learning of the planned peaceful protest, she alerted the Wausau Police Department and requested extra police patrols outside her home.

Zunker, an avid local protester herself, has previously protested against Wausau area police. Zunker was fine with protesting and denouncing the police right up until she wanted the police’s help when she was on the receiving end of a peaceful protest for the first time. Zunker is also on the board of directors for ACLU-WI, a group that is currently advocating for defunding the police. Would the police officers she wants to cut include the ones currently patrolling the area surrounding her home?

Zunker’s hypocrisy highlights how Democrats across the country are willing to join calls to defund the police despite benefitting from safe communities protected by adequately funded police departments themselves.