Happy Earth Day to everyone in Wisconsin except Lt. Governor and Democrat Senate candidate Mandela Barnes, who claims to be an expert on environmental issues because he chairs a task force on climate change. However, when asked if any of his “55 concrete strategies” for addressing climate change in Wisconsin had been successfully implemented, Barnes could not name one: 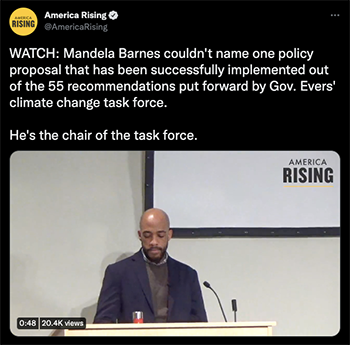 Republicans have shown that protecting our environment doesn’t have to come at the expense of our economy, but the far-left climate change proposals that Barnes and his opponents support would raise taxes, hurt the U.S. economy, and kill blue collar jobs. It’s no wonder that his task force was a failure.

“Just like his primary opponents, Mandela Barnes is all talk when it comes to putting forward serious solutions to the problems facing our nation. Amid historic inflation and Biden’s gas hike, Wisconsinites don’t want a far-left candidate who plans to upend America’s economy and make their problems worse – but at this point, Barnes’ only redeeming quality is that he can’t get it done.” – Republican Party of Wisconsin Rapid Response Director Mike Marinella