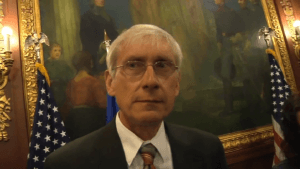 [Madison, WI] – Wednesday, Governor Tony Evers delivered remarks during the third day of the Democratic National Convention taking place “in Milwaukee.” Like Joe Biden, Evers has spent most of the last few months hiding from his constituents in his Madison bubble. Following his remarks, Republican Party of Wisconsin Executive Director Mark Jefferson released the following statement:

“Tony Evers is a weak leader who has turned control of Wisconsin over to far-Left activists — the same thing Joe Biden will do if he’s elected president. Evers has failed to deliver for hard-working Wisconsinites when they need help the most, leaving tens of thousands of unemployment claims unfilled. His tepid response to violent riots in Madison left a city building fire-bombed, our historic capitol damaged, and two statues celebrating our heritage toppled.

“Tony Evers has been governor for two years and has little to show for it. Wisconsin Republicans are organizing to beat Biden in November, and will throw out Evers once we’re done.”