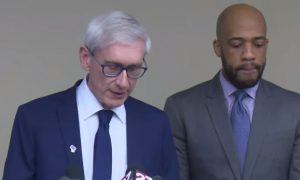 [Madison, WI] – In case you missed it, the hyper-partisan nature of the Evers era hit a new low on Wednesday when the Evers Administration was caught secretly recording Republican lawmakers with the goal of scoring cheap political points.

Not only does Gov. Tony Evers’ secret recording demonstrate Wisconsin Democrats’ eagerness to throw political civility to the wayside, it raises questions as to the motivations of the Evers Administration in general. When Wisconsin’s Republican leaders thought they were meeting with Gov. Evers to discuss COVID-19 in Wisconsin, the Evers Administration made sure they had a Nixon-esque recording of the meeting in hopes of scoring political points.

The Evers Administration claims the Governor was unaware that his conversation with Republican lawmakers was recorded. Throughout his time in office, the Governor has been largely disinterested in running the state and would rather have his hyper-partisan staff call the shots. So far, the Evers Administration has not apologized to Republican lawmakers or announced any disciplinary action against the state employee responsible.

Despite promises to bring people together during his campaign for Governor, Evers’ time in office has been marked by political posturing while it has sought to conceal its work from the public eye. Gov. Evers and his administration have made efforts to conceal records from public scrutiny and will not let in critical media outlets to his press briefings.

The secret recording also raises questions about other actions the Evers Administration has taken during his time in office. Was this the first time the Governor or his staff secretly recorded lawmakers? When did Gov. Evers become aware of the secret recording? What other decisions are the staff making without his consent? Will the staff member responsible be held accountable?

Republican legislative leaders lashed out Wednesday at Democratic Gov. Tony Evers after his staff secretly recorded a May 14 phone conversation over how to respond to the coronavirus pandemic the day after the state Supreme Court struck down the state’s stay-at-home order.

The recording and the reaction to it all but ensures a permanently broken relationship between Evers and Republicans who control the Legislature. The two sides have rarely gotten along since Evers was elected in 2018 and Wednesday’s episode was characterized by GOP leaders as unprecedented.

Evers’ spokeswoman, Melissa Baldauff, said the governor was not aware of the recording and instructed his staff not to do it again.

“This conversation was supposed to be about a potential path forward on a statewide approach to the COVID-19 crisis in our state following the Republican lawsuit to overturn the Safer At Home order,” Baldauff said in a statement.

“The recording was intended for internal use only to inform detailed note taking and planning next steps. This was not intended for release to the media or anyone else, however, we were obligated to comply with the open records law to release these records once they were requested.”

The Evers’ administration had put a stay-at-home order in place to fight the coronavirus, and Vos and Fitzgerald sued over it when the administration extended it past Memorial Day.

The court ruled 4-3 in Republicans’ favor and the state’s top leaders met soon afterward. During the call, Evers sought a new rule to fight the coronavirus, but Vos and Fitzgerald said they wanted more details about what it contained and questioned whether one was necessary.

Fitzgerald, who is running for Congress this fall, said in a statement that the recording “will completely erode our ability to work together for the foreseeable future.”

“In 26 years in the Legislature, this is one of the most brazen examples of unethical, unprofessional conduct I have ever seen,” his statement said. “The governor has gone so far off the deep end, he’s making secret Nixonesque recordings from the East Wing of the Capitol. This conduct is totally unbecoming of our state’s top executive and opens up questions about what other recordings his administration may have.”

Vos called the recording “clearly outside the norm.”

“Governor Evers has dragged partisan politics to a new low in Wisconsin and damaged his reputation and the state’s, as well,” his statement said.

Bill Lueders, president of the Wisconsin Freedom of Information Council, said recording a conversation without alerting the other parties isn’t illegal in this state, but is in bad form — and that the nature of the meeting should have pushed the three to talk publicly instead of privately.
…

Assembly Majority Leader Jim Steineke, R-Kaukauna, said someone in the Evers administration should lose their job over the recording.

“If no one in the administration loses their job over this, it’ll be a clear indication that this secretive taping was an order from the very top,” he tweeted.
…