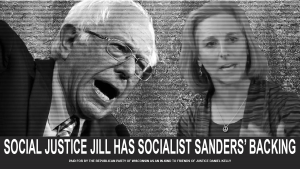 Jill Karofsky’s hypocrisy truly knows no bounds. Karofsky spent her entire campaign attacking Justice Daniel Kelly for the support Republicans have given him, but is now gladly accepting Socialist Bernie Sanders’ endorsement, $1.3 million from the Democratic Party of Wisconsin and hundreds of thousands from other liberal groups. Karofsky demonstrates the epitome of a “do as I say, not as I do liberal.”

Sanders threw his support behind self-proclaimed social justice warrior Jill Karofsky because he believes that judges like her know “that addressing the gun violence epidemic in this country is one of the most critical issues of this generation.” This comes after Jill Karofsky advocated for gun control and said that our Constitution allows limiting our right to possess firearms.

“Judges should know that women have the right to control their own bodies, that workers have the right to bargain for better wages, that same-sex marriage is a right, and that addressing the gun violence epidemic in this country is one of the most critical issues of this generation,” Sanders said in a statement. “Judges should stand up for the needs of working people and civil rights, not huge corporate CEO donors, which is why I strongly endorse Judge Jill Karofsky for the Wisconsin Supreme Court.”

The Supreme Court race is officially nonpartisan, but like those before it has turned into a partisan brawl. Karofsky has criticized Kelly for getting Trump’s endorsement and headquartering his campaign in the state Republican Party’s office, even as she has leaned heavily on the Democratic Party for $1.3 million of support.