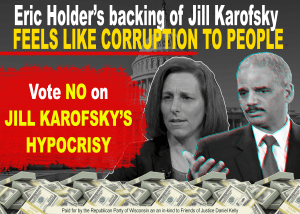 For someone who talks so much about “fighting corruption” in her campaign for the Wisconsin Supreme Court, it’s beyond hypocritical that Jill Karofsky would also accept so much help from the National Democratic Redistricting Committee whose sole aim is to “favorably position democrats for the redistricting process.” Karofsky has repeatedly campaigned on the fact that we can expect to see a court case involving redistricting to end up at the Wisconsin Supreme Court, and that if she is elected, she will be there to rule on the case.

Karofsky has spent her entire campaign decrying how Justices can’t possibly be fair and objective when deciding cases that are important to their big donors. To use Karofsky’s own words from her appearance on Up Front, “That feels like it is corruption to [voters], so we need to have judges that will make decisions on what the law is and not because they had big donors in their last campaign.” Holder’s big-money backing of Karofsky certainly removes all doubt surrounding how Jill Karofsky would rule on a redistricting case if it came before the Wisconsin Supreme Court.

We should not expect Karofsky to recuse herself on a case involving redistricting if such a case ended up before the Supreme Court with Jill Karofsky. Time and again she has promised voters that she would be there to decide upon redistricting cases when they inevitably end up before the court.