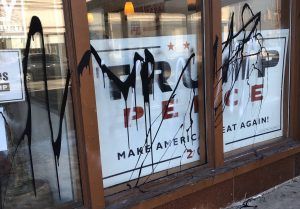 Read more about the incident:

In an interview, Andrew Hitt, chairman of the Republican Party of Wisconsin, indicated that the incident might be politically motivated.

“I think we’ve seen all over this country the intolerance that the left has for conservative thought, conservative ideas,” he said. “I think this is just another example of it. We’re not going anywhere. We want to be part of this community. We came here to talk about the president’s accomplishments, the accomplishments of Republican legislators in Wisconsin. We’re going to continue to do that.”

“We’ve seen this increased intolerance of the left,” said [Andrew] Hitt. “Freedom of ideas to talk about what we believe in — that’s what we’re here for, to be part of this community.”

Republican officials in Wisconsin say an outreach office they recently opened in Milwaukee has been vandalized.

“This level of intolerance from the left won’t change our commitment to reaching voters in every community with our message,” said Andrew Hitt, chairman of the Wisconsin GOP in a statement. “These intimidation tactics will not stop us from telling our positive story of Republican reform in the city of Milwaukee, and we look forward to continuing to engage in the community.”

The Republican Party of Wisconsin says they won’t be deterred by the vandalism.

“We’re here,” said Chairman Andrew Hitt. “We want to be part of this community, that’s not going to change.”

African American Outreach Director for the Republican Party of Wisconsin Khenzer Senat came across the vandalism at his workplace Wednesday morning.

Black and white paint was scribbled across the windows, and the word, “scum,” was tagged on the back door.

“Not happy about vandalism plain and simple,” Senat said. “I want this office to be a place that individuals can come in and we can have civil dialogue.”

“Spray paint along a number of the windows. The word scum written on the back door. Obviously, we’re just very disappointed in that. I think it’s a little jarring for our staff to come in and see that, but we’re here. We’re going to continue to be here, at this office, in this location, recruiting volunteers. This is our home base for the Milwaukee community to get out and tell our story,” Wisconsin Republican Party Chairman Andrew Hitt.