[Madison, WI] – Tony Evers is continuing his dishonest campaign that misrepresents his failed record. In a new ad, Tony Evers once again says that he’s working with Republicans – but history proves otherwise. 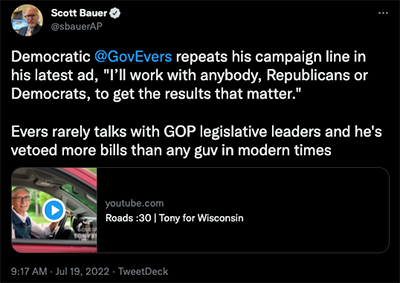 Evers wants voters to believe that he works across the aisle, but he notoriously doesn’t speak to Republican leaders in the Capitol, took credit for their historic tax cut after he tried to raise taxes by $1 billion, and even secretly recorded their conversations.

“Tony Evers talks out of both sides of his mouth,” said Republican Party of Wisconsin Communications Director Anna Kelly. “He launched his campaign by running against Republicans’ agenda, but now, he’s claiming to work across the aisle and taking credit for their accomplishments. Evers can’t have it both ways.”