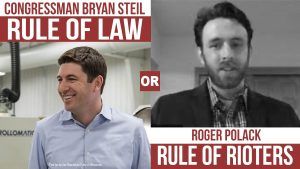 His liberal opponent in his congressional race, Roger Polack, defended a group of rioters involved with the protests — even after the Kenosha Police arrested the group in question with illegal fireworks, gas masks, helmets, protective vests, and controlled substances. Polack isn’t bothered by lawlessness, and employs staff members that donated to a prominent criminal defense fund responsible for bailing violent individuals out of jail in Minneapolis.

Read more about Congressman Steil standing up for law and order here, or find excerpts below.

Rep. Bryan Steil (R – Janesville) is calling U.S. Attorney General Bill Barr to investigate unrest in Kenosha – in particular, what he calls “the funding and leadership structure of criminal groups.”

“The violence and destruction in Kenosha was heartbreaking to witness,” Steil said in the release. “As we saw in the days that followed, many of the criminal agitators came from outside our community of Kenosha.”

The congressman continued: “Thanks to our federal and local law enforcement agents, the U.S. Marshals and Kenosha Police Department successfully stopped out-of-state protesters whose van was filled with fireworks, helmets, and gas masks.”

“Criminals must be held accountable and we must look into their source of funding. I will continue working with federal, state, and local partners to prevent riots and destruction from occurring in Kenosha and other cities across the nation,” according to Steil.