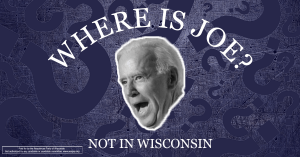 [Madison, WI] –  Ahead of President Donald J. Trump’s visit to Wisconsin during the Democratic National Committee’s convention, the Republican Party of Wisconsin issued the following statement from Chairman Andrew Hitt regarding President Trump’s record on the economy:

“Joe Biden isn’t just hiding in his basement this week, he’s hiding from Wisconsin. While Biden is nowhere to be found, President Donald J. Trump is showing Wisconsin that he is committed to building the economy and creating jobs. Thanks to President Trump, Wisconsin’s economy hit historic highs and now the President is committed to getting our economy back on track again following the unprecedented pandemic. While President Trump is focused on safely reopening America, Joe Biden continues to hide in his basement with his plans that fail to hold China accountable, raise taxes, and kill American energy jobs.”